NOVEMBER 13: The Cardinals announced that Murray will be inactive today, so it will indeed be McCoy starting for the Cardinals. Stafford is also out for the Rams, who will turn to Wolford in a key divisional battle of the backups.

NOVEMBER 12: The Rams are likely to be without their starting signal-caller when they host the Cardinals tomorrow. Arizona could very well be in the same position, however; ESPN’s Jeremy Fowler tweets that Kyler Murray is in danger of missing the Week 10 matchup. 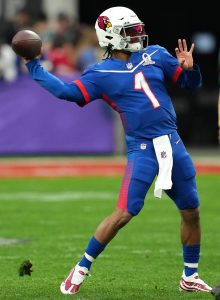 Murray is currently dealing with a hamstring injury, which, Fowler notes, he will test before the game. There is reportedly “skepticism” that he will be able to play, though. The 25-year-old is officially listed as questionable.

Murray entered the 2022 season, his fourth in the league, with significant expectations. Those were driven not only by his experience and draft status as a former No. 1 overall pick, but by his five-year, $230.5MM extension signed this offseason. That deal, in turn, came shortly after head coach Kliff Kingsbury and general manager Steve Keim were re-upped and briefly included a controversial study clause.

2022 has not gone according to plan for any member of that trio. The Cardinals sit at the bottom of the NFC West with a 3-6 record, ranking mid-pack in most offensive categories. The team’s struggles to find a rhythm prompted Kingsbury to admit last month that he could cede play-calling duties. A number of absences in the receiving corps – including DeAndre Hopkins‘ PED suspension, along with Marquise Brown‘s foot injury – have contributed to the middling production.

As for Murray himself, the Oklahoma alum sits at 12 touchdowns and six interceptions on the season. His yards per attempt average (6.0) is a career-low, as is his rating of 86.9. With 359 yards and a pair of scores on the ground, he remains productive with his legs, of course, but inconsistency in the passing game has cast even more doubt on the Cardinals’ decision to make the high-priced commitment to him.

Assuming Murray is unable to suit up, the Cardinals will turn to Colt McCoy at quarterback. The veteran is in his second year in Arizona, and made three starts last season. While a matchup pitting McCoy against Rams backup John Wolford would be unexpected for both the teams and the league, it would not take away from its significance in a division which is up for grabs entering the second half of the campaign.