Hours after learning Breece Hall will be lost for the season, the Jets are making a move to replace him. They are trading for Jaguars running back James Robinson, Ian Rapoport of NFL.com reports (on Twitter).

The Jaguars’ rushing leader in 2020 and 2021, Robinson has seen his role reduced due to the rise of 2021 first-rounder Travis Etienne. Robinson will be set to team with 2021 draftee Michael Carter for a 5-2 Jets team. The Jags will acquire a conditional sixth-rounder from the Jets, with ESPN.com’s Adam Schefter adding (via Twitter) the pick could become a fifth. 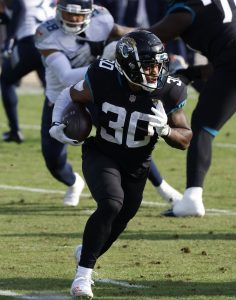 This news comes after Doug Pederson said Robinson was dealing with knee soreness. The Jets will bet on the UDFA success story, despite the Division I-FCS product being less than a year removed from an Achilles tear. Robinson, however, has bounced back from that severe injury. He has amassed 340 rushing yards on 81 carries this season, scoring three touchdowns.

In Robinson, the Jets are acquiring a player who set an NFL record for the most rookie-year scrimmage yards (1,414) accumulated by a UDFA. Robinson did that in just 14 games two seasons ago, being shut down for Jacksonville’s final two contests. After Etienne went down with a Lisfranc injury during the 2021 preseason, Robinson rushed for 767 yards and eight touchdowns. While the December Achilles tear ended Robinson’s second season on a sour note, he still saw his yards-per-carry figure increase from his rookie year (4.5 to 4.7). He is at 4.2 this season.

As a former UDFA, Robinson can be extended at any point. But he can also be kept in 2023 on an RFA tender. This gives the Jets options. For now, however, he stands to join Carter in the team’s post-Hall backfield.

A 2021 fourth-round pick, Carter is averaging 3.5 yards per carry. Carter began the year with a bigger role, but as Hall progressed in Mike LaFleur‘s offense, the North Carolina product became a clear backup option. It will be interesting to see how the Jets deploy Robinson and Carter, but the former has proven far more as an NFLer to this point.

Jacksonville is now committed to Etienne. The Jags played Robinson on just 12 snaps in Week 7, signaling a changing of the guard. The team took Etienne during Urban Meyer‘s one year running the show, doing so after Meyer surprisingly lamented Kadarius Toney being picked just before Etienne became the team’s choice. Etienne is signed through 2024 but can be controlled through 2025 via the fifth-year option. Trevor Lawrence‘s versatile Clemson teammate, Etienne has progressed in his first NFL games. He has totaled 566 scrimmage yards in seven games, scoring his first touchdown as a pro Sunday.